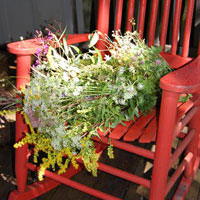 Southern Botanics specializes in collecting, pressing, mounting and framing flowers, leaves and other plant materials in the style of botanical engravings. All of our items are original hand-crafted artworks. We record on each of our mountings the Latin and common names of the plant, the date collected and the location in the style of herbariums maintained by museums and other scientific and research institutions. We use only archival-quality 100% cotton rag paper which is acid-free and lignin-free. Because flowers and plants are classic and timeless in their own right, our artworks are equally at home in a cabin in the woods, an ocean-front cottage or an elegantly appointed town home.

Austin Davis-Selph is a native Atlantan and a graduate of Georgia Southern University with a BBA in Marketing. His passion and love of nature began at an early age. Austin’s paternal grandfather instilled in him his wisdom and respect for trees, plants and animals among other things. He can remember riding with his “Grandan” to his Lake Lanier home and being quizzed on the names of trees which dotted the country roads. His maternal grandmother was an avid gardener who tended her flower beds from sunrise until sunset. On his many trips to Knoxville, Tennessee, Austin and his grandmother spent hours in her garden learning the names of her beautiful flowers and how to keep pesky rabbits from eating her handiwork. These two individuals instilled in him not only a love of nature but also a work ethic of dedication and perseverance.

After working over 21 years in corporate America, Austin decided it was time to pursue his passions. In 2014, Austin and Douglas Davis-Selph started Southern Botanics which marries Douglas’ creative side with Austin’s business sense.

Douglas Davis-Selph grew up in the pine woods and fields of south central Georgia and his favorite pastime as a kid was tramping through those woods and fields foraging and collecting anything he might find along the way: ancient arrowheads, turtle shells bleached white by the sun, juicy blackberries, native wildflowers and interesting seed pods (and sometimes the occasional frog).

After graduating from Georgia Tech and the University of Georgia School of Law, Douglas has lived his entire adult life practicing commercial real estate law in the booming metropolis of Atlanta, but has never completely gotten that rich south Georgia dirt out from under his fingernails. Like his parents and grandparents before him, he has always had a love of gardening and growing things.

His appreciation for foraging, flowers and plants evolved into a hobby and now a small business of pressing botanical specimens and mounting them into eye-pleasing compositions working with his business partner (and spouse) Austin Davis-Selph.